The last few days have been really tough for me. Hubby overseas, my back went out, and the basement flooded with sewage. 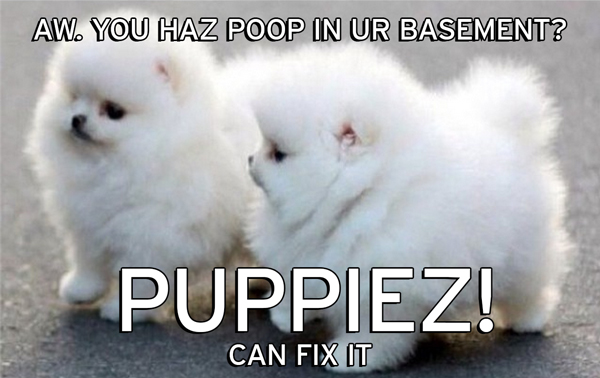 Navigating that stress has been a challenge, since my best stress relief is exercise, which I CANNOT DO right now. SO. I may have lost my cool a little. Especially when the idiot insurance adjuster misread my contract and had me convinced for a few hours that the damage would not be covered. (Turns out, it was. Idiot.) Which brought me back to a trick I learned in high school.

We had to take a class called “Living Skills,” which was almost as cheesy as it sounds. There was, however, one thing I learned in that class that I have used over and over again with major success.

If you are dealing with a difficult service person, an aggressive bar patron, or a stubborn principal, this is amazing at diffusing the situation and allowing you to be heard. Plus, you’ll be the cool-headed person in the situation, which will likely help you get your way. Here’s how it works:

When the insurance adjuster told me, “Ma’am, I’m really sorry to tell you this, but none of the cleanup is covered. Your policy only covers water damage to stoves, ovens, washer/dryers, and refrigerators.”

What I said to him was, “That’s ridiculous. That’s unacceptable. This really makes me want to switch insurance companies because I don’t know why I gave you any money for something this stupid.” He apologized again (actually he said, “I’m sorry you feel that way,” which is the RUDEST thing I think anyone can say by invalidating your feelings) and said he’d contact my agent to see if there was anything we could do. “You do that. And get back to me,” I said, fighting off tears.

What I should have said was:

“I think you are mistaken and there must be some issue with my policy. It makes me feel like I’m not being treated as a loyal customer of 13 years. I would like you to contact my agent to get this resolved.”

Better, right? I wouldn’t have been insulting him, I would have clearly stated my feelings without yelling, and told him what he could do to make everything better. Of COURSE I think of this after the fact!

Another true life example where this worked for me:

I was getting my car serviced a few years ago. The service guy was giving me a hard time, saying they probably couldn’t do the work I needed (this was a dealership, mind you—if they couldn’t do it, who would?). I was too intimidated to remember to use this technique so I could request the other 2 things that needed work. So after I cooled down and got my car back (without getting all the work done), I called the manager. I said, “Hi, I brought my car in for service, and I think your guy was being aggressive and evasive about getting some work done (I explained the situation in more detail). It made me feel too intimidated to request that you also take care of XYZ. I would like you guys to take care of XYZ, but I’d appreciate it if the labor charge was comparable to having the work all done at once.” The manager said, “You sound very reasonable and calm (he actually said that!), and I’m so sorry you had issues with our guy. He will be disciplined and we are happy to do the work for parts only, no charge for the labor. We apologize for the trouble.” It worked better than I expected. Not only did I get the work done, I saved $400. If I’d called in tears, bawling about how rude the guy was, I’d probably get some apologies, but I could have been written off as an emotional, irate customer just trying to get free work done on her car.

So back to my shit-filled basement: hopefully I won’t have to deal with this exact situation again, but there will be conflict as we get into insurance claims and documentation. I’m hoping to remember to use this technique because it really does work.

Have you had a conflict where you wish you’d used this technique? Tell me about it in the comments!

2 thoughts on “Resolve a Conflict in 3 Easy Sentences”