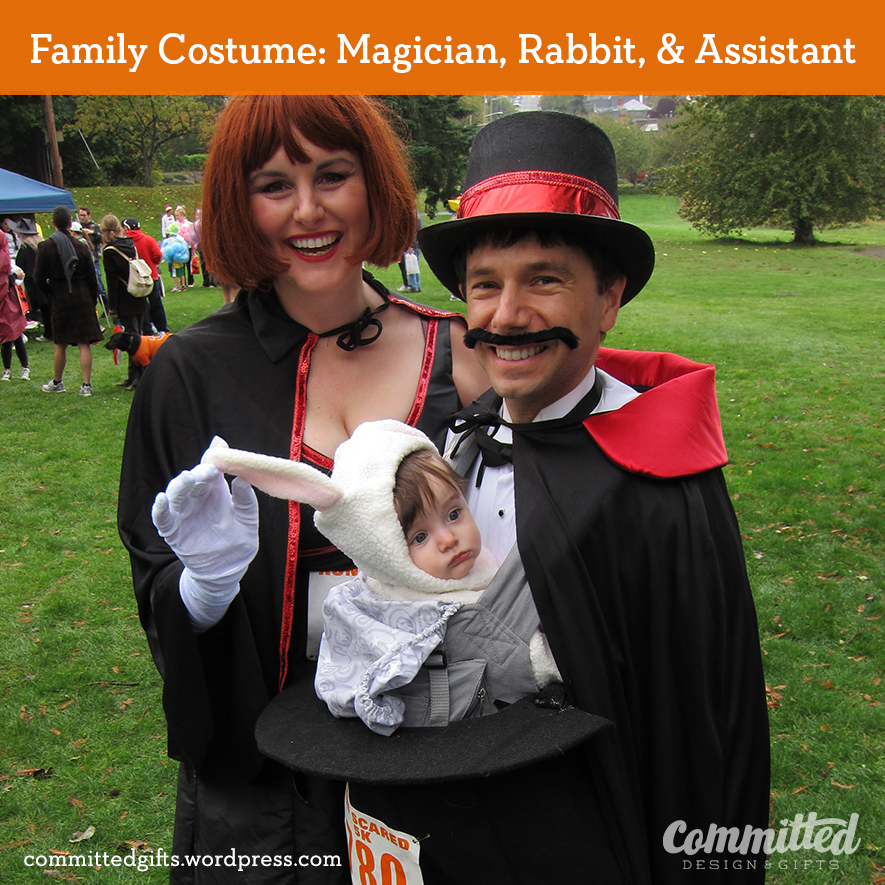 Halloween in our family is a REALLY. BIG. DEAL.

Actually, we take any excuse to dress up in costume. My husband loves the decorating. I love the candy. The kiddo will hopefully love all of the above.

Since we’ll be traveling this year and missing out on the good ol’ American fun, I thought I’d walk down memory lane and share a few of our costume ideas. I’m sad to not do what we had planned, but hey, I’ll take a trip to Spain over a good costume any day!

The Magician, His Rabbit, and the Assistant

I don’t know where the idea came from–I was trying to find something cute for my then-8 month-old that would work in a carrier and that we could integrate as a family. I found the bunny costume at a consignment shop, and the rest was history!

We won 8 pounds of Vermont cheddar for our efforts. I’m not kidding. We ate it all. Also not kidding.

I wish I’d taken pictures of the making of this, but I’ll try to describe it in simple detail.

– For the body of the hat, I used black felt, purchased from JoAnn fabrics. I wanted something with a little structure to it.
– The brim was styrofoam board, with the inner radius trimmed to fit around the Ergo carrier. The outer dimension was cut to look proportional. It’s really only a half-hat.
– I measured what I needed for the width of the bottom to fit around the kiddo’s legs, then did a little math to figure out the dimensions of tetrahedrons I’d need to make the body of the hat.
– The body of the hat was sewn, the brim was glued and stapled. I stapled some 2-sided velcro on to hold the half-hat onto the Ergo. It didn’t last the 3 wearings, but it was a solid enough job.

Don’t tell anyone but it’s actually a Dracula costume. Looks the same as a magician, right? The mustache is actually play eyebrows. I added some sparkle to the hat, but the rest is store-bought.

I got this dress at a thrift store. It was actually a bridesmaid dress, and was too long and too small for me. I actually made a bodice out of the back with rivets and some black pleather to cover the exposed skin, then added some of the red sparkle to make us all match.

The Fierce Lion: The Next, and Less Successful Kiddo Costume

Again, we tried the family costume route. This was kind of like the failed sophomore album of a popular band. We came out strong, but lost the wind in our sails. Though kiddo was super adorable, she refused to wear her mane, so nobody could really tell what we were until we explained that we were on safari and had been attacked by the fiercest little lion on the Savannah. When you have to explain it, it’s not really a great costume.

Again, this was a combo of thrift store, store-bought, and craftiness. I’m pretty proud of the camera and binoculars, which I DID happen to grab a photo of. Those were made with the Gerber snack containers, cardboard, black duct tape, and aluminum foil. We still have them and they’ve withstood the test of time!

And at last, the “Couple Costumes” from our pre-baby days:

Flight of the Conchords

Ah, those lovable Kiwis. The hubby and I were obsessed. We thought they were hilarious. So, we paid tribute in the best way we knew how.

We had to modify our wigs with some trimming and spraying. FYI–DO NOT use the color hair spray on a wig. You know how I know? Because it flaked off all night and I looked like a coal miner at the end of the night. The color doesn’t stick to synthetic material. So if you need to change the color of your wig? Go permanent and grab regular spray paint. Otherwise, all was good!

I mentioned in a past post, Keeping up with the Kidless, that our friends have really creative ways of getting us out of the house. One is the celebration of Grandparent’s Day, which we do by dressing up and going bar-hopping. Let me tell you, I don’t know who enjoys it more, the people dressing up, or the people watching us! I typically don the character of a Boca retiree originally from New Jersey. The trick to the lovely bronzed skin is simple foundation. I bought the darkest Cover Girl color I could find, and just slathered myself with it. The trick to this particular outing was that I was secretly 10 weeks pregnant, so I used the Ensure bottle to conceal the fact I wasn’t drinking. THAT, and I stuffed my undershirt with saggy boobs, so really no tummy would be noticeable.

Finally, the Milkman Delivers a Little More Than Milk

Thanks for taking a walk through our Halloweens past! What are you dressing up as this year? Are you plotting with friends or family to do something together? Do tell!